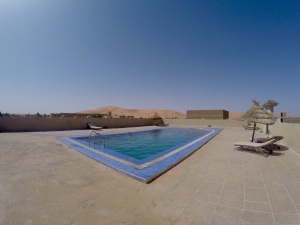 pool overlooking the dunes in the kasbah

After a bumpy and sweltering 45 min ride we arrived at the kasbah in Merzougha, Western Sahara around 5pm. The intensity of the sun was now beginning to wane, but it took me a good 30mins to gather the motivation to make the 2 min walk to the nearby pool in the kasbah – if a pool is needed anywhere, it is this place!

Two hours before sunset we set out on the camels for the 1.5 hr journey to the desert camp where we were to spend the night. I mounted Al-Jabal (the Mountain), named so for being the tallest one in the caravan. Camels are amazing beasts but are very lazy; after a lot of moans and groans Al-Jabal finally got up. On the initial stretch  every step Al-Jabal took on the hard dirt road sent me tossing right and left until we hit the sand where he proved his agility and superiroty. The ride was swift and smooth from thereon and one couldnt help but wonder how perfectly crafted this beast was for that terrain. We arrived at the camp just before sunset; and I climbed the nearest dune to watch it, a sight we overlook in our daily lives, but is truly a spectacle in these surroundings untainted by man.

After a hearty meal, some top quality bedouin tea, shesha and music most of the people in the camp retired while me and two sisters I had met in the camp, Anna and Elenya, decided to take up Mstaphas (our guides) offer for a hike to the highest dune around midnight. Having read the account of snakes in the Sahara in Ibn Battutahs travels I was not particularly thrilled about the idea of navigating in the sand barefooted under the moon light:

There are also many snakes in this desert. There was in the caravan a merchant from Tlemcen who had a habit of taking hold of these snakes and playing about with them..One day he put his hand into a lizard’s hole to pull it out and found a snake there instead. He grasped it..but it bit on the index finger of his right hand, giving him severe pain. It was cauterized, but in the evening the pain grew worse, so he cut the throat of a camel and put his hand in its stomach and left it there for the night. The flesh of his finger dropped off and he cut off his finger at the base. 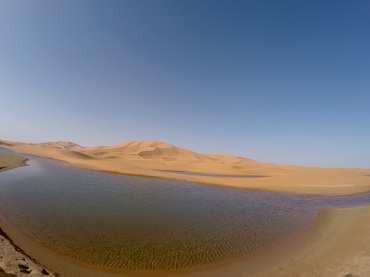 Sunrise in the Sahara

The desert camp, I pulled my mattress outside the tent by the fire to sleep under the stars

Thinking as a last resort if anything happened there were plenty of camels in our caravan I followed Mstaphas lead. What if the camels were all needed for transportation or one couldn’t slaughter them for some reason, you ask ? Apparently the warm stomach of a chicken does the trick too! If anyone happens to fall victim to a snake bite (God forbid) and try this remedy, do tell.

The view of the desert from the top in the moonlit night was as mesmerizing as it was in the punishing heat of the sun. The only difference was that the hellish heat had subsided and a cool breeze was blowing. The sky was alit showering its light on the dunes below, transforming the desert into a truly heavenly setting.

Back at the camp, I pulled my mattress out in the open and stargazed to sleep.. In the morning we hopped back on the camels to make our way to the kasbah. After two days I’d had enough of the desert heat and spending my last night in the kasbah I headed to Rissani for the 12 hour bus ride to Marrakech.