After an hours hike puffing and panting I came to a grinding halt. I had only covered 1.5km distance.  With the sun out in full blazing glory and the treeless plateau of Deosai lending no place to hide, the weight on my back was bearing down hard. It was impossible to keep pace with the occasional cloud that chanced the wide open blue skies providing a fleeting glimpse of a shadow.

At my current pace it would certainly take me another couple of hours to hike up the few kilometres before the descent to Chilam started. I had only recently heard about Minimarg, a scenic town close to the Indian border, and was hoping to catch a ride there the same day. Army had done considerable amount of work to pave the road heading to Minimarg but there were still plenty of dangerous patches yielding to several hundred feet of deadly falls on a miscalculated turn. Night travel was virtually impossible.

For now I had no option but to continue on foot. After another hour of slow and deliberate trek the dirt track yielded to a well tarmacked road and a lone wooden shack turned up with a few kids playing in the adjoining field. Curious, as to who this lonely stranger with a big back pack was they came to investigate. All of them hailed from a village close to Chilam, in the same direction I was headed. After a little rest with no sign of a potential lift I got up to continue. My entourage by now had grown from a solo traveller to a traveller with four young and eager companions.

Asghar Ali, who worked as a librarian in Skardu, had made an early start to visit his family in his hometown of Astore. Instead of choosing the longer but well paved route via Karakoram Highway he had decided to take his Honda 125 on a bumpy but scenic ride cutting across the Deosai Plains.

Upon hearing the sound of a bike in the distance my travel companions made a huge raucous and flagged his bike down from a mile away. Bidding farewell to them I jumped on the bike. In half an hour we were at Chilam ‘Chowki’ (check post). I had requested permission to visit Minimarg prior to leaving Skardu and was hoping that someone had already informed the check post about my arrival.

The sentry came out of the guard room and sizing me up asked a few questions before inquiring,

“App kiss k mehmaan hain?” (Whose guest are you?)

My father happened to know the Commanding Office in the Northern Areas at the time. His name was bound to expedite permits and open gates fast, I thought.

I replied with an air of confidence.

A look of amused disbelief came across his face; he looked me up and down again, and asked me to confirm the name of the Commanding Officer. Sensing that the official was too important to ignore; still my appearance of a travel hardy backpacker made him pause and think, before he finally went back inside the guard room to make inquiries.

It took a while before my credentials were finally verified and I was escorted to a waiting area. My cousin, a Captain in the army, who happened to be posted in Minimarg at the time later informed me with a loud chuckle that the sentry had rang into the Army Camp and his voice laden with doubt inquired,

To the sentry it seemed farcical that someone claiming to be the guest of a senior official could be hitch-hiking there. Thankfully my cousin decided to own me up and not sever the family ties for my lack of following the protocol.

Due to Minimargs’ proximity with the Indian border I had to restrict my camping and trekking ambitions and was forced (read: glad) to swap my tent for a cosy shell proof underground bunker. 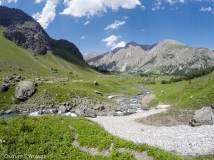 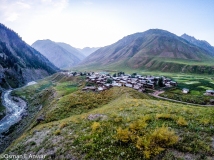 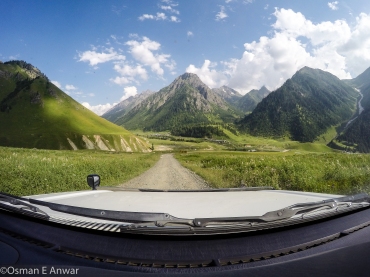 Minimarg served as the perfect prelude to the spectacular lakes and roving green mountains of Domail. The fact that both these places are hard to get to, coupled with the special permit requirements meant that they were out of reach of the typical “tourons” (touristic morons who throng to these beautiful places and litter them) and absolutely pristine!

My original plan was to get to Domail on horseback but a scurry to the riding stables in Minimarg proved that the riding skills I had acquired as a toddler needed much more than just a brush up! With my riding hopes dashed, I resorted to my proven and tested method – asking around if someone was heading to Domail. And sure enough a 4×4 was going there the next afternoon.

On the way to Domail camouflaged by trees is the striking little village of Nagai with identical wooden cottages. My tiny GoPro coupled with the rickety 4×4 I had caught a lift on hampered my (otherwise professional!?) ability to capture its splendour, so you have to take my word for it!

The crown jewel of that region however is the beautiful Rainbow Lake that takes on different colors at different times of the day. The water is crystal clear sourced from the streams and springs coursing their way down the mountain. It is one of those lakes that make it hard to resist a plunge especially when you see a wooden ramp leading to what could be the perfect diving platform. The sun will dry you out in no time.. if only protocols did not get in the way! So instead of a dip I hopped onto a raft that took me across the lake to the other side where lunch was already waiting in a picture-perfect wooden hut overlooking the lake. It was delicious and a far cry from the paratha rolls I had been consuming the last few days – rumour has it, that the cook responsible for catering had been personally enlisted by the ‘powers that be’ in that region. A wise choice and one that I fully endorse!

Minimarg and Domail proved to be as ravishing for my visual cortex as they were for my salivary glands. However my wandering spirit felt subdued by the restrictions imposed on venturing off the designated tracks and trails. I was told about a scenic Ansoo (tear) Lake a few hours hike from Domail right on the border (yes there are two Ansoo lakes but most people have only heard about the one in Kaghan). Sadly I was prohibited from trekking there and my spirit shed an ansoo or two. One day I hope as much as anyone else that we (Pakistan and India) can get over our differences and be fully able to explore the beauty of our own as well each other’s countries uninhibitedly.

After three days in Minimarg and Domail I was ready to head to Astore. Filled to its 16 strong capacity, I paid an extra Rs. 100 for the front seat in the local jeep van that left promptly at 9am for Astore and saw Minimarg disappear in the distance.

(a modified version of this article was published in Dawn)