“They were looking for Shias”, Aisars voice grew sullen “and my cousin happened to be on that bus” he said with a look of sadness in his eyes. Dipping his biscuit in his chai he continued, “but bhai, the situation has improved a lot since Nanga Parbat”, referring to the tragedy back in 2013 when the ‘Killer Mountain’ famous for its notoriously high fatality rate gave its nom de guerre another dimension for altogether different reasons.

A group of foreign climbers were butchered by TTP terrorists (Janud e Hafsa faction) dressed as paramilitary forces in a late night raid at the base camp. A tragedy that could well have been averted had authorities taken notice and decisive action against those responsible for the Shia killings in Chilas leading up to the incident. But alas, in Pakistan the value of a human life is directly correlated with wealth, power and status. Action mostly taken when someone from those ‘that matter’ fall victim to this senseless violence.

Aisar and I are sitting at one of the ubiquitous tent khokhas that have sprawled up all over Rama meadows with the Polo Festival only three days away. The District Government organizing and supporting the event has transported horses and all the paraphernalia but not one garbage dumpster is in sight! As we speak Shabbir, the khokha owner, empties the remaining biscuits in a plate and conveniently chucks the packet behind a boulder. A small pile has gradually accumulated there. Noticing my unamused look he assures me not to worry as this will disappear in a few weeks. Puzzled, I inquire if there is some sort of a cleanup drive by the authorities after the polo festival?

His tent is right next to a fast flowing stream that will eventually merge into Astore River. He doesn’t care what the consequences are for those living downstream. As long as nothing remains where his tent is pitched come next year. Sadly this is the attitude shared amongst many others who only come to the Northern Areas for commerce, depicting a complete lack of empathy or understanding of the environment and the eco-system; selfish to say the least. Enjoy, plunder and ‘Allah pay choar do’ (leave it to God) a convenient excuse we have all become so attuned to. The district government on the other hand is preoccupied with putting up banners boasting the names and faces of the district and provincial officials backing the event. Needless to say there is no provision for basic toilet facilities knowing that an entire districts populace will be descending on these beautiful meadows in three days. 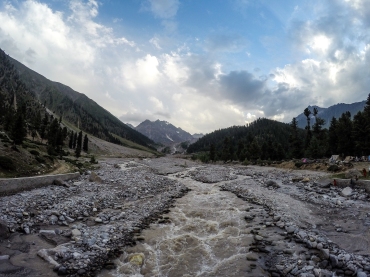 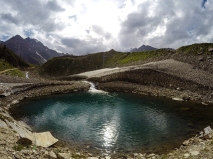 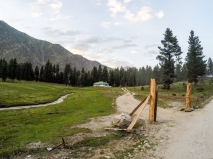 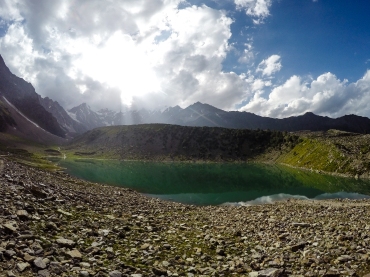 Going only by the distance is utterly deceptive in this region. Rama is about 8km from Astore Bazaar and a hike up can be a good five to six hour scramble. I regretted doing just that. Aisar was revving up his bike that had been returned to him by a friend, as I reached Choungrah. Sticking to the oldest trick in my book I inquired about the distance to Rama (secretly hoping for a lift). Shaking his bike to get a feel for how much petrol remained in the tank, while the needle pointed dead straight at Empty.  As if he read my mind, Aisar cheerfully said, “Bhai I can take you as far up as the petrol lasts”, and signalled me to hop on. The sun had already gone down. The Pine, Juniper and Cedar trees cast ghostly shadows that stretch across the landscape in the moonlight. Rama looked beautiful with just enough light to hide the ugly marks made by humans and enhance the beauty of nature.

Rama Lake is still another 2 hrs trek from the meadows. The two guest houses at Rama – PTDC and Forest are both fully booked, as is the case during summers, by government dignitaries (!?). Having left my camping gear in Astore I decide to head back down with Aisar and return to Rama Lake the next day.

The bike refuses to kick start having used up the reserve in the tank.  My head-torch provides us just enough light to dodge the potholes and avoid a tumble off the mountain. We roll downhill back to Choungrah with no petrol and no headlight.

Aisar insists that I have dinner with his family. All the male members of their family (cousins and uncles) gather at the family home for dinner as is the custom. There baithak (lounge) is large enough to accommodate 25 odd guests. Lamb korma, rice chapatis and raita followed by kheer are delicious yet unmatched by the warmth of the young and generous man that I have only met a couple of hours ago.

The following day I hike to Rama Lake along a narrow and dusty track. The Lake is magnificent. On a clear day you can see Nanga Parbat. In-fact you can trek to the East Side of Nanga Parbat from Rama Lake. Sadly, the entire route to Rama Lake is screaming of deforestation. I see thick and tiny stubs protruding from the ground, reminiscent of mighty greens that thrived there once.

As I stand there admiring the view across the landscape my eyes settle on Nanga Parbat – the second highest mountain in Pakistan, a country with the second largest Shia population in the world, that is failing to protect its natural landscape as much as it is failing to protect the diversity of its religious and ethnic landscape. Perhaps this time we will not wait for a bigger tragedy to jolt our collective conscience into action, and save the meadows from becoming a deforested garbage dump.

(a modified version of this article appeared in Express Tribune)