A Night Amidst The Giants of Deosai

I first came across the name “Land of the Giant” in a blog post by Salman Rashid. It had never before occurred to me that Deosai could have anything to do with a Deo (giant). And so I decided to embark on a trip hoping to spot the giant(s) that inhabited this beautiful plateau above 4000 meters.

Stocked with six omlette-paratha rolls I hoped they’d be enough to last me two days camping in Deosai.  I was glad I didn’t need to carry any water as Deosai had ample fresh water springs (though I never imagined a dirty diaper would greet me at a source of one of these; if that wasn’t enough there were still plenty of plastic bottles and wrappers thrown about this beautiful plateau, a very worrying sign as the number of people that frequent Deosai is on the rise, but this is a topic for another post !). My back pack with the tent, sleeping bag, and the little food and gear I was carrying was already a back breaking 25+ kilos and I intended to trek out of Deosai to Chilam, so economizing on weight was crucial.

A college friend posted in Skardu proved an invaluable source and organized a jeep ride to drop me in Deosai. From Skardu to the entrance of the national park took about 1.5 hours. A bored looking wildlife official met us at the gates. After collecting the customary Rs. 40 entrance fee, he handed me a pamphlet which had some useful information about the national park, and let us through.

The doorway into the land of the giant belied the beauty that would be sitting atop higher than the slopes we were gradually climbing. The jeep grunted and groaned as it clambered up the narrow and winding track, wedged between the mountains, following the course of the river that raged below. Once atop the narrow track opened up into a endless expanse of beautiful unhindered green plains, peppered with purple, yellow, blue and white flowers. Fast flowing streams cutting across the landscape with vision only hindered by beautiful snow laden mountains in the backdrop of this plateau.

The first sign of habitation we encountered was a small shackturant (read: khokha) near Deosai Top (also known as Ali Malik Mar) close to which was a Gujjar encampment. And who knows their milk better than a Gujjar? So we decided to settle for some khalis doodh patti and witnessed their butter making skills, using goat skins, first hand. Each summer these Gujjar nomads travel from Punjab to these lush green pastures to fatten their herd. I’m told they have to pay a small fee for each animal they bring to graze (?) Hailing from a Gujjar family myself it was an interesting encounter with my distant kinsfolk that had decided to stick to the trade rather than settle in the cities. For once I was envious of their life style – overwhelmed by the beauty and magnitude of this treeless, never ending, green expanse they had decided to call home for the summers.

An hour later we reached Bara Pani where there was a Wildlife Project encampment. This was one of the places I had in mind to set camp for the night, but it meant that I’d have a very long and arduous trek the next day to reach Chilam . One of the wildlife officials suggested I continue all the way up to Sheosar Lake close to where there was also a bear sanctuary. Could the elusive deo or deos (if there were more than one) of Doesai be the Himalayan “brown bear” that inhabit this region, I thought ?

By the time I reached Sheosar lake it was 4pm. As the sun began to set the few local tourists who had flocked to it earlier slowly disappeared. I quickly ditched the idea of pitching my solo tent by the lake, as the thought of a brown bear ripping it apart snapped me back to reality.

I had spotted Aslam, a tenturant (read: tent khokha) owners’ tent pitched a few hundred meters away from the lake, and decided to pitch mine there too. Aslam showed me a white flour trail at the back of his mess tent that led up the hill. The culprit, he suggested, could only have been a brown bear with enough strength to move the rocks lining the base of his tent. He wasn’t taking any chances with his supplies tonight and decided to sleep in the mess tent, the theory being if a bear smelled a human inside he’ll go away.I wasn’t sold on the wisdom of his theory considering the countless people who have been mauled by brown bears elsewhere in the world.. Having recently watched “The Revnant”, I’m convinced he’s got it all wrong! 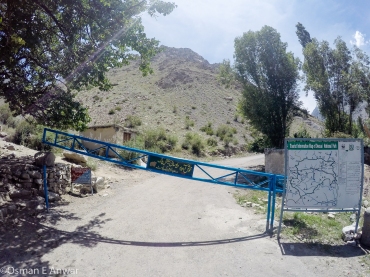 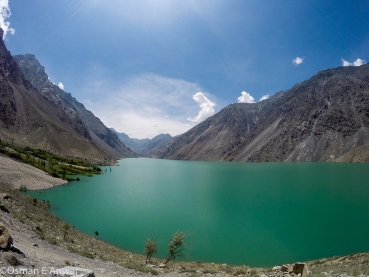 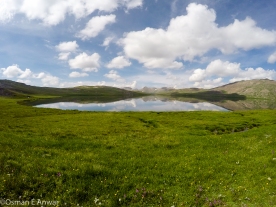 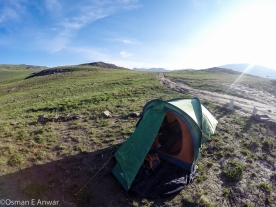 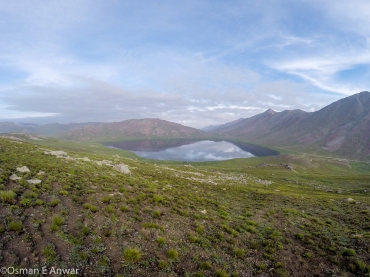 At night fall the stars had the sky completely alit, the moon light illuminated the distant white mountain tops. After a stroll around the lake I settled into my sleeping bag hoping to wake just before sunrise and go searching for the brown bear if it hadn’t already found me by then!

After hardly an hour of sleep I woke up shivering. The temperature had hit sub-zero and my sleeping bag with an extreme rating of -7 C was proving inadequate. A slight headache symptomatic of altitude sickness, which usually hits the hardest at night, had crept in too. I jumped into my base layer, fleece, and woollen socks and snuck back in to the sleeping bag, only to wake up minutes later to the sound of something ruffling outside my tent. The first thought that struck me had my senses fully heightened, ‘Could it be the bear that had ransacked Aslams mess tent last night?’

I wasn’t taking any chances, the vision of a bear paw tearing through my tent lunging for the paratha rolls and catching my limbs as an extra treat was enough for me to grab my jacket head torch and jump into my boots. Sensing the direction which the sounds was coming from, I opened the tents zip on the opposite side and with my light flicked to full beam I jumped out of my tent. Showing the light frantically in all directions I couldn’t spot a thing. Just as I was about to head back to the tent, I noticed a horse grazing at a few meters distance. Feeling relieved and disappointed at the same time I shooed him away and meekly made my way back in. Repeating the same episode twice that night around 2am and 4am, I gave up on the idea of sleep.

The sky was already turning crimson, the sun eager to pierce the early morning sky with its rays. I looked at my map and decided to trek over to the summit of a peak overlooking what was marked as a bear sanctuary. The visibility was good enough to spot a bear from a few hundred meters away, giving me enough of a head start in case I had to make a run for it.

The trek to the summit took longer than I had expected, the clear air and unending expanse of green had deceived me into thinking it was closer than it really was. By now the sun had already burst through the sky. With the temperature shooting up quickly, my hopes of spotting a deo, that I thought to be the brown bear, known to stay in cooler climes, dwindled. Feeling inadequately equipped to spend another night on my own and running low on food, I decided to break camp and trek to Chilam.. Determined to return another day.

(a modified version of this article was published in Dawn)